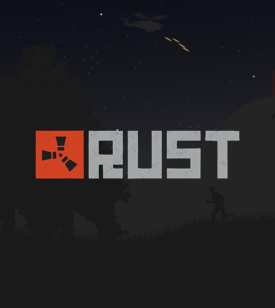 Rust server hosting - in 3 minutes online, preinstalled and without any contract!

The Facepunch Studios developed Rust and it went straight to the hearts of Survival Sandbox Players. The Community of Rust is growing and growing. The game takes the best of all survival games and puts it into a cold and aggressive environment where you have to fight for your life. Wild animals and hunger are only two possibilities to die. Garry's Mod creator Garry Newman wanted the biggest possible amount of players, this is way up to 200 people can play on one server!

Rust server hosting is necessary for more than 75.000 online players around the world

You do start in full nudity and your only equipment is a stone, bandages and a torch. Gradually expand your tools, build great houses and find a way to survive against other players! Basically you are a mixture of Bear Grylls and MacGyver paired with some Bruce Willis. Who wouldn't rent a rust server?!

Online within 3 minutes and easily administrable - this is the main focus of the Gamecloud.

Rust server do have a multiplier if you order them. So 1 classic Gamecloud slot is 2.5 Rust slots. Then you can define the period (3, 30 or maybe 90 days?), pay with the service you love PayPal or credit card and get instantly started. The Gamecloud offers beginners an intuitive user interface for Rust, where the server is set up within a few clicks. The server is online to every player on the whole world, there is no restriction!