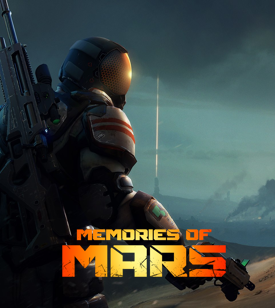 Memories of Mars PS4: The failed colonization of Mars

In Memories of Mars you take on the role of a clone on Mars. The dream of mining resources on Mars and colonizing the red giant has failed. 100 years later you fight for survival on the hostile Martian soil. Together with your friends you explore the wasteland, build a base and face countless dangers.

Over 16km² of the Mars landscape can be built on, explored and conquered. Deserts, craters, canyons and mountains always present you with new challenges. During the exploration you will learn more about what led to the retreat of the former settlers. More than 120 sights offer varied moments. Among other things you will discover: abandoned cities, mines, industrial plants and biodomes.

In addition to discovery and exploration, Memories of Mars also requires you to pay attention to the basic needs of each clone: Food and drink. Resources are needed to make the equipment, which can then be produced in a 3D printer. The functions of the printer are manifold: From functional modules to impressive fortresses, almost everything can be produced with the 3D printer.

Battle system from Memories of Mars

In Memories of Mars you will find a quest-like system, known as the "Emergency Protocol", which guides players through various tasks in the environment. During global events, escape pods land on Mars for which players can fight over. And with a little know-how you can build your own escape capsule with your group and send it back to Earth.

Rent Memories of Mars PC server in the Gamecloud

Memories of Mars PS4 servers have room for 10 to 100 players, so don't wait too long and rent your own server. You can choose from prepaid, instant bank transfer, PayPal, Paysafecard or credit card payment methods. For customers from the Netherlands or Poland we also offer iDeal and przelewy24. No contract commitment, no waiting times, easy to use and switch between the different games of the GPORTAL Gamecloud at any time. You don't feel like playing Memories of Mars? Then use the slots for a Citadel or ARK server. Our servers in the GPORTAL Gamecloud offer full flexibility and immediate online access.