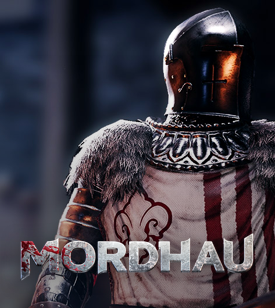 Rent a Mordhau US Server

Mordhau lets you engage in multiplayer battles with up to 64 players. In addition to huge battles, the medieval multiplayer slasher also offers a battle royal mode. You decide whether you want to play from an Egoperspektive, or in third person. You also have a free hand when choosing the characters. Whether merciless mercenary or longbow archer - Mordhau opens completely new possibilities for you. Beside the customization of the character you have the possibility to construct your own weapons and make custom-made armour.

Play in Co-Op mode with your friends on the battlefield

You and your friends can fight against waves of enemies in Horde Mode. Skill and team play are essential. The medieval locations won't forgive a single mistake! The battles don't just take place on foot. In Mordhau you can defeat your enemies with cavalry and control siege machines like Catapults or Ballists.

Rent your own Mordhau server at GPORTAL

Mordhau places great focus on realism. An enormous arsenal of weapons is at your disposal as a player. Each hit can decide between victory and defeat. We can't tell you whether you want to go into battle with a big sword or rain arrows from the sky with a longbow. With our Gamecloud you can test Mordhau and get the usual top hardware from GPORTAL as prepaid. Choose the slot amount and the time (30, 90 or maybe 180 days?) and rent your own personal gameserver to experience the Middle Ages up close. This means you don't have to sign a contract and you can switch between many games in our cloud. Full flexibility and instantly online. This is the GPORTAL Game Cloud Translated with www.DeepL.com/Translator

Here you can find out which of the available websites are accessible. If you need help, please contact Customer Service.

All prices listed on the homepage are inclusive of the statutory VAT (currently 19%).

All texts and graphics published on www.g-portal.com are subject to copyright and may not be used without the consent of the author. Reproduction or dissemination of individual contents or complete pages without prior consent will be prosecuted both under criminal and civil law. Ociris GmbH is not responsible for the content of the pages, which is indicated by a link (URL), but the respective information provider. Ociris GmbH does not guarantee the accessibility and timeliness of the linked URLs. We assume no liability for damages resulting from the use of this site. Place of fulfillment and exclusive court of jurisdiction is Munich.

The European Commission is providing an online dispute resolution platform, which can be found at http://ec.europa.eu/consumers/odr/.

Payment for customers from Germany