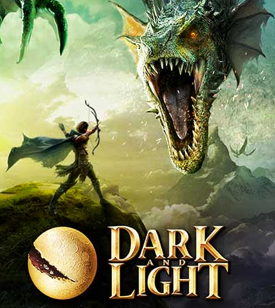 The team behind Dark and Light works also for franchises like ARK Survival Evolved, so they know how to handle big projects. The company named Snail Games and they are the creators of Dark and Light, which makes the hearts of fantasy lovers beat faster. DnL combines classic sandbox elements like Build, Craft and Survival with unlimited char-building from MMO titles. This mixture, coupled with an incredible detail of a huge world, invites players to thousands on Dark and Light Servers. People, dragons and foreign peoples operate trade or wars, with up to 100 players and thousands of NPCs, Dark and Light offers potential for immense gameplay.

After more than 10 years of development - yes, 10 years! - Snail Games has created a world with dark and light that has never existed on the UE4 engine. With magic one builds his world according to his own wishes to the light or calls the beings of the darkness. Magic, dragons and a fabulous world are the core building blocks of Dark and Light Server. With more than 80 km², Dark and Light offers 20x more space than ARK Survival Evolved. The whole was not designed loveless, as far as can be judged now. There are water, mountain, caves, sand and forest biomes, an extensive building system and with over 12 races and 14 different classes an immense variety of playable character options. Dark and Light Server get the best out of the UE Engine to rent a performance for Dark and Light Server, which g-portal.com plays naturally into the maps.

Dark and Light server hosting in the Gamecloud